Hon. Catherine S. Callbeck was born on July 25, 1939, the daughter of Ruth and Ralph Callbeck of Central Bedeque, PEI. She received her early education at Central Bedeque School and Summerside High School. She later received a Bachelor of Commerce degree from Mount Allison University and a Bachelor of Education degree from Dalhousie University in 1960 and 1963 respectively. She also completed post-graduate courses in business administration at Syracuse University.

After a period teaching business in New Brunswick and Ontario, Callbeck returned to Prince Edward Island where she became involved with the family business, Callbeck's Ltd. of Central Bedeque.

In 1978, she left provincial politics and returned to the family business.

In October 1996, she retired from provincial political life and returned to the family business.

Callbeck has had a long and active involvement with charitable and public service groups and organizations at all levels. Among other positions, she has served as chairperson of the Confederation Centre of the Arts board of directors, member of the board of regents of Mount Allison University, member of the UPEI board of governors, member of the Maritime Provinces Higher Education Commission, board member of the Institute for Research in Public Policy, and was installed as the ninth chancellor of the University of Prince Edward Island in 2018.

Her charitable activities include being a director of the United Way of PEI, director of the Heart and Stroke Foundation, PEI Division, and a member of the provincial committee for the International Year of the Disabled. She also served on several committees and in several capacities in and around her home village of Central Bedeque.

I had to push myself. I pushed myself different times through my life to get over shyness because I realized if I didn’t get over it I would never be able to do things I wanted to do.”

“The big decisions are made in the Legislature in Charlottetown. They are not made out here in Central Bedeque. Because of my previous experience I was comfortable working in a man’s environment.”

on the skills needed to be a good leader

"You have to realize that when you go into politics you are never going to make everybody happy. You have to have a thick skin and you have to be emotionally pretty strong and stable.” 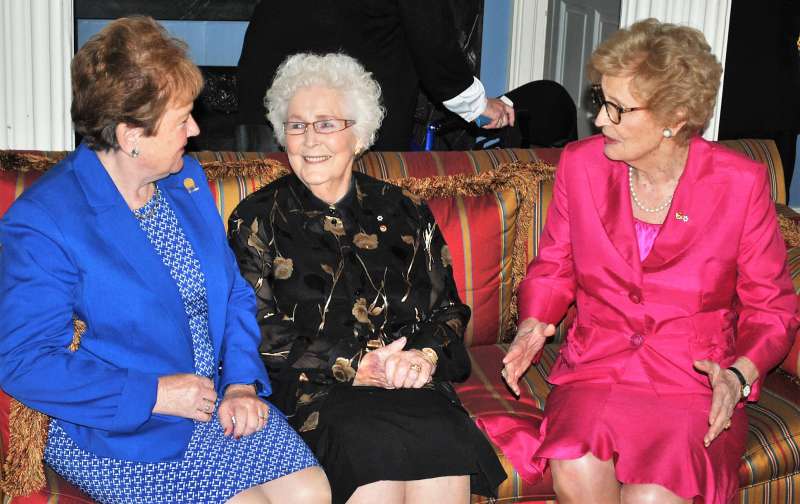 ​on the PEI Famous 5 photo

“I mentioned it different times when I would be speaking in other provinces. I look at that photo with great pride. I feel very fortunate to have worked with those four women who have, as well as raising families, made a huge contribution to the province.”

The Premier acts as the province’s head of government, as well as, the president of Executive Council (also known as cabinet). The Premier selects members of cabinet from the elected members of their party.

To date, Hon. Catherine Callbeck is the only woman to serve in the role of Premier in Prince Edward Island. She first took over the role on Jan. 25, 1993, after winning the leadership of the Liberal Party of Prince Edward Island following the resignation of then premier Joe Ghiz. She led her party to victory in the general election of March 29, 1993, and served more than three years before retiring on Oct. 9, 1996.

For a full list of Premiers who have served PEI, visit the Historical Premier’s Gallery