Reid was born on Jan. 4, 1929, in North Rustico, PEI, the daughter of Michael and Loretta (Whelan) Doyle. She was the fifth child in a family of eight. On June 29, 1949, she married Lea P. Reid and together they had eight children: Maureen and Colleen (twins), Kevin, Bethany, Marylea, David, Andrew, and Tracy.

Reid was educated at North Rustico, Stella Maris School, and Prince of Wales College, where she graduated with her First Class Teacher's License at the age of 17. While at Prince of Wales College, she won the John H. Bell Prize for debating, and the Lord Strathcona Prize for physical education. Following her graduation, Reid taught school for three years in North Rustico and Hope River, both situated on the north shore of Prince Edward Island. After the birth of her twin daughters in 1950, Reid took leave from teaching and remained at home for a number of years to raise her family.

Reid taught school for 21 years, with her last four years as principal of St. Ann's Elementary School in Hope River. During her tenure, she was awarded sabbatical leave to return to university (1972-73), where she completed the requirements for a Certificate 5 Teacher's Licence, and was awarded two scholarships for academic excellence.

Reid served as secretary on the board of governors of the Prince Edward Island Teachers' Federation for seven years. As an active community worker, Reid was president of the Sterling Women's Institute; Catholic Women's League; 4-H leader; a charter member of the Queen Elizabeth Hospital Foundation; and a member of the Zonta Club of Charlottetown. She was a member of the Roman Catholic Church, and attended church at St. Ann's, Hope River.

Reid was appointed as Lieutenant Governor of Prince Edward Island on Aug. 16,1990, and served until 1995. She was the first woman to serve in that role in the province and in Atlantic Canada.

Reid spends her free time with her ever-growing family, and still has a keen interest in politics and the Progressive Conservative Party of Prince Edward Island.

You have to have a little bit of common sense when you are in politics. Know when to shut your mouth and know when to talk. Above all, be kind to people. If they have an opinion, you are not going to start arguing with them. Say I can see where you are coming from.”

on why she decided to put her name on the ballot

"It was Angus (MacLean) asking. My mother nominated him and he wanted me, so I said yes. You’ve got to make up your mind and have the guts to take on the challenge. There are things important in life. If I hadn’t done that I would have missed a whole lot of things that came along. I always tell the children take every opportunity that comes along because you never know what it will develop into.”

on harassment and being fearless

“I can’t imagine any woman in the legislature or Ottawa who is not fearless. How the hell do you get there if you’re not fearless? I wouldn’t put up with any of that foolishness. You don’t have to.” 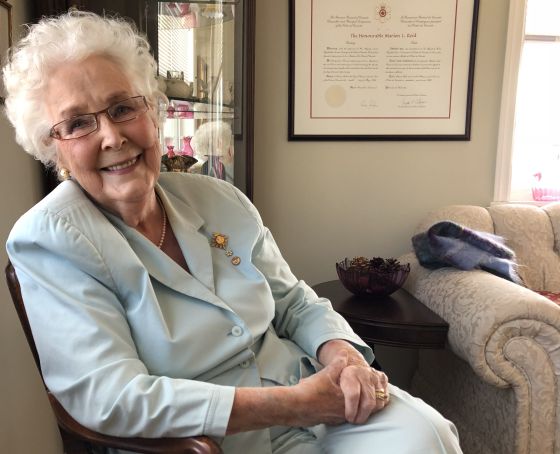 if given the chance again, would she seek public office?

advice to girls and women

on going for the nomination

“If you intend to be in politics you have to get out there and get yourself known. Go to some meetings and to things where people see that you have potential. I never believed in this here business that somebody owes you something. No one owes you anything. You work for everything you get. If you have potential and you feel you have something to give and that you can make a difference, you go for it.”

Lieutenant Governor is a position that comes on the recommendation of the Prime Minister of Canada and represents the British Crown here on Prince Edward Island.

The Lieutenant Governor exercises the Crown’s powers and authorities with respect to Prince Edward Island. One of the most important responsibilities is to ensure that the Province always has a Premier. If this office becomes vacant because of death or resignation, it is the duty of the Lieutenant Governor to see that the post is filled. The Sovereign's representative has the same responsibility if the government resigns following a defeat in the Legislative Assembly or in an election.

The following women have held the position of Lieutenant Governor of Prince Edward Island: