Former Speaker of the Legislative Assembly, Cabinet Minister, and MLA

A Political Life Not Planned

Nancy (Garrison) Guptill was born April 28, 1941, in Halifax, N.S., to Lloyd and Evelyn Garrison as one of 12 children -- eight girls and four boys. She was educated at the Halifax Vocational School and the Victoria General Hospital.

She married L.R. Gregg Guptill in 1964, and was the mother of three daughters: Krista, Nancy Beth, and Peggy. The family moved to Bedeque, Prince Edward Island, in 1975.

After her retirement from politics, Guptill served as the chair of the Workers Compensation Board of Prince Edward Island. She remained active with Liberal Party functions where she shared advice and her experience with members, as well as current and future political figures.

Read the feature on Nancy Guptill: A Political Life Not Planned

I was thoughtful about what I did. I think I did things with kindness, purpose and hard work."

advice to girls and women aspiring to leadership roles

on getting involved in the politics

"It was something I did not go out and intentionally plan. In fact, if anybody told me I would be involved, I would have said baloney.”

on reflecting on her political career

“It is all part of the past for me now. I miss it because I loved it. I could have stayed in it forever. I was that sort of person. I feel that I gained a whole lot from it, and I think it has been good for my family in many ways, too. I feel stronger because of it. I feel maybe a bit better educated because you get to know certain things, and I stayed apprised of things that were going on publicly. I feel just overwhelmed and enjoyment for being involved.”

on being a trailblazer

"I never thought about it. I never dreamed that the history of my involvement would amount to trailblazing. It is more important as we sit her now than it was previously.” 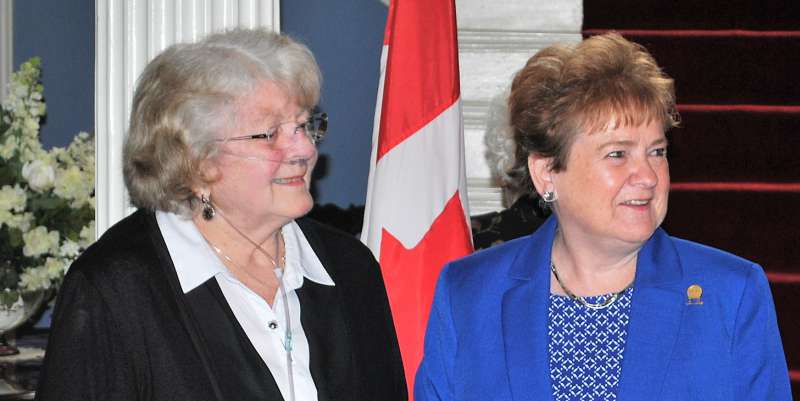 “One of my favourite persons was Pat Mella. I just love Pat. I don’t know what she would say about me, and it wouldn’t matter – and I have never said it to her to be honest with you – but I always thought the world of her. She was a little go getter, a little firecracker.”

Speaker of the House

The Speaker is a MLA elected by secret ballot at the beginning of every new General Assembly of the Provincial Legislature (also called the House).

All MLAs are eligible for consideration of election to the position with the exception of the Premier, members of Executive Council, the Leader of the Opposition, and leaders of other political parties sitting in the Assembly.

Once elected, the Speaker's first duty is to claim the "ancient and accustomed parliamentary rights and privileges" on behalf of all members, the most important of which is freedom of speech in debate. It is also the Speaker’s duty to preside over the debates and make sure the House follows rules of procedure and behaviour, upholding the individual and collective privileges of the MLAs.

On Prince Edward Island, the Speaker’s role is always evolving, but the fundamental responsibilities for the Speaker is to conduct the business of the office in a non-partisan manner and to be responsible for ensuring that all MLAs are treated fairly and impartially.

There have been five women in the role of Speaker of the Legislative Assembly of Prince Edward Island. They are: